A few days ago when I pulled up to the house after rounding up kids from school, there were noticeable changes on our front porch. Santa mats had been placed inside and out the front door, a cranberry red wreath hung on its hook and several poinsettiashad been placed all around the entrance way, which was spot clean. Opening the door, I smelled the divine fir needles before I saw the Christmas tree, upright in its stand, set in the far corner of our living room.


Someone was in a festive mood.
That someone being Luis, my husband, who wasn’t allowed to celebrate Christmas growing up and has never showed much enthusiasm about the holiday until recently.  Having all three kids under one roof has a way of inspiring a guy.
There are a lot of bizarre, random rules in Cuba, but criminalizing Christmas sits near the top of the list for me.
This has always been a fun holiday in my house. I remember my brother and I getting up at 4:00 in the morning to see what Santa had left for us, checking that he had eaten his cookies and finished his milk, and then passing back out, sprawled among G.I Joe’s and Hello Kitty’s, so that our parents could find us like a staged Toys-R-Us setting.

To the contrary, Fidel Castro outlawed Christmas, as well as all other religious activity and holidays, completely when he took over in 1959, naming Cuba an atheist state. Christmas also got in the way of the country’s sugar harvest festival so poof, it was gone.

Suddenly no trees, no decorations or outward signs of celebration were allowed, except in tourist hot spots, though Christmas had existed on the island for 450 years. Initiated by Christopher Columbus, who is known as Cristóbal Colón in Spanish-speaking countries, when he landed in Cuba in 1492, European traditions and customs, including Navidad,were born on the island.

Until Castro’s take over, Christmas Eve or La Noche Buenawas a highly festive event with musicand a feast, full of Cuban favorites – roasted pork, drenched in their seasoning of choice, mojo, with sides of yuca, congri (a rice and black bean mix), plantains, sidra (Spanish apple cider) and wine.  Desserts were flan, rice pudding or turrones de almendra (almonds) or coco (coconut), the latter of which should be named Heaven. Creamy, shredded coconut squished with condensed milk, orange zest and vanilla, and today, enshrouded in dark chocolate and chilled. I could swim in the stuff. 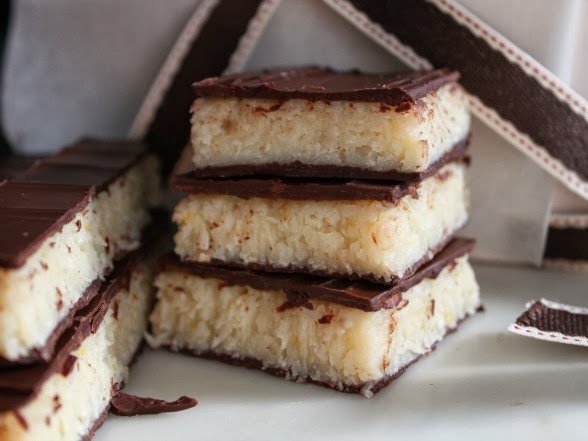 There used to be midnight mass and Christmas Day was spent visiting family members, though by the time Luis came into the world this was simply something of the past.

I am told, however, it was treasured in secret by many. One Cuban friend said that growing up she had a neighbor who was a pilot and he had a Christmas tree in his living room. It was a ‘big deal’ and everyone did their best to catch a glimpse of it.


While Pope John Paul II coaxed Castro into restoring Christmas celebrations in 1998, today it is still not encouraged or looked highly upon by the government.
So tonight in Cuba there will be private get-togethers countrywide, as well in homes like ours across the U.S.  Luis has changed the menu up and bought lobster, which he will grill, open-faced, and then bury into a large pan of vegetables on the stove and steam into some deliriously good thing. There’s a pretty bottle of Amarone, gifted to him this past weekend, which I look forward to opening as well.
Tomorrow, it’s my turn. For mid-morning brunch I am going to cook a leek and Gruyèrefrittata, turkey bacon and chocolate chip pancakes for the kids (OK, and me).
A couple of days later we are headed to Cuba and for the first time in five years we are going to ring in the new year in Havana, with my mother-in-law, Ana, who will meet her 18-month-old granddaughter for the first time. Marcos, who will be seven in May, and I haven’t been in five years.
With Christmas nixed, New Year’s is an all-out affair, festivities in the street and beyond.
I am super excited and and hope to have lots to report when we are back. If able, I will blog from Havana, but don’t know the odds of that yet.
Happy holidays to you all and see you in 2014!
I’ll close it out with a traditional Christmas, salsa style.  Tito Puente and Cuban Queen of Salsa, Celia Cruz, sing about looking for a tree in the forest on Christmas Eve: Arbolito