Bravo Channel’s Top Chef judge and James Beard award winner, Hugh Acheson, releases The Broad Fork: Recipes for a Wide World of Vegetables and Fruit (Random House) today.  In it produce takes the main stage while Hugh not only reels Southern food back to its roots, but also lends importance to community-supported agriculture. 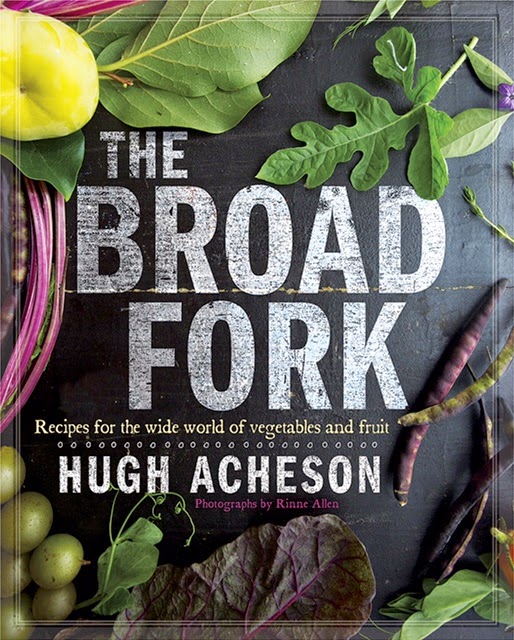 “It’s all about cooking from your CSA box,” says Canadian-born Hugh in a mid-morning call from his home in Athens, Ga.  “Utilize what’s in season and around in the market.  You know, basically answering the age-old question of ‘What the hell do I do with kohlrabi?’”

That very question was, in effect, the impetus for the book, after a neighbor found the unfamiliar, knob-like German vegetable in his home-delivered produce box and hit Hugh up for ways to craft it in the kitchen.

On the spot, Hugh wedged out a couple of ideas that included slaw and a lobster and curried butter blend, both of which are included in The Broad Fork, but forever fascinated by connections between food and community, he began to think more about creative and uncomplicated ways to make the most of seasonal crops.

Recipe share of that beauty of a kohlrabi dish above:

Hugh Acheson | THE BROAD FORK
Make sure you buy lobsters alive and kicking, and buy them when they are in season. They really don’t take that long to cook. I usually figure about 6 minutes per pound in boiling water, and onto the table. In this recipe, we cook it a little further in the pan, so I shorten the boiling time, to 4½ minutes per pound.
Serves 2 as an appetizer or a light main course:
3 tablespoons Curry Butter (recipe follows)
½ bulb kohlrabi, peeled, halved and sliced into ¼-inch-thick half-moons
½ fennel bulb, cored and thinly sliced
2 garlic cloves, thinly sliced
1 live lobster (1¼ to 1½ pounds), boiled for 4½ minutes per pound and cleaned and cut into pieces (instructions follow)
Kosher salt
2 scallions, thinly sliced on the bias
1 teaspoon freshly squeezed lime juice
In a large sauté pan, melt half of the curry butter over medium heat. When it begins to bubble and froth, add the kohlrabi and the fennel. Cook for 5 minutes to soften the vegetables. Then add the garlic and the lobster pieces. Season with kosher salt to taste.
Cook for 3 minutes, to warm through and finish cooking the lobster pieces. Then add the scallions, lime juice, and the remaining curry butter, stirring well to fully incorporate the butter, beautifully glazing the vegetables and the lobster.
Spoon the contents of the pan onto a platter, and serve. Maybe a chilled white Burgundy will appear if you think nice thoughts.
CURRY BUTTER
Makes 1 cup
¼ pound (1 stick) plus 1 tablespoon unsalted butter, at room temperature
1 tablespoon minced shallot
1 teaspoon ground ginger
1 teaspoon curry powder
1 teaspoon lime juice
Melt the 1 tablespoon of butter in a small saucepan over medium heat. When it bubbles and froths, add the shallot and cook for 2 minutes. Add the ginger and curry powder and cook for 1 minute more. Then add the lime juice, stir to combine, and remove from the heat. Set the mixture aside to cool to room temperature.
In a small bowl, mix the remaining stick of butter with the sautéed shallot, ginger, and curry. Mix well, then place the mixture in a jar and refrigerate.
HOW to COOK a LOBSTER
I remember my family committing culinary atrocities with the classic Canadian lobster. Boiling it for too long in insipid water made for a less than regal end for the poor little
crustacean. To me, lobster is an attainable luxury, so one should know how to turn it into an impressive meal.
Makes 1 lobster
2 tablespoons Old Bay Seasoning
1 lemon, thinly sliced
3 sprigs fresh thyme
4 bay leaves
Sea salt
1 live East Coast lobster
Pour 2 gallons of water into a large stockpot set over high heat. Add the Old Bay, lemon slices, thyme sprigs, bay leaves, and enough sea salt so that the water tastes pleasantly like the ocean. Bring to a boil and then add the lobster. Cook for 5 minutes per pound—so a 1¼-pounder will take 6 minutes—and then transfer it from the pot to a platter (if you are going to eat it then) or to an ice bath (if it is for later use in a recipe.) If it’s the former, get a bib, some claw crackers and picks, and go to town. If the latter, then let’s clean that lobster up:
Place the lobster on a couple of paper towels on top of a cutting board, and twist off the tail. Using poultry shears, cut off the outer side of the tail’s shell, being careful not to actually cut into the flesh. Twist off the claws and knuckles, and cut the shells on those too and remove the meat. (Sometimes it is safer to use a claw cracker than shears. I leave this to you.) Inside each claw is a sheer piece of shell that runs inside the meat. Pull this out from the back of the claw meat. It will look like a little translucent boomerang. Take all the meat you have freed from the shells and rinse it quickly under cold water to remove the white stuff that accumulates on the cooked meat. This is hemolymph, which is kind of what the lobster has instead of blood. Chop the shells and carcass up for a bisque or stock, and chop the reserved meat into pieces or prepare as your recipe indicates.

“Recipes reprinted from The Broad Fork: Recipes for the Wide World of Vegetables and Fruits. Copyright ©2015 by Hugh Acheson. Photographs by Rinne Allen. Published by Clarkson Potter/Publishers, an imprint of Penguin Random House LLC.”